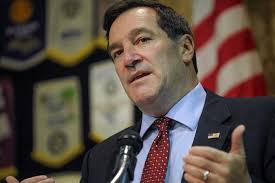 U.S. Senator Joe Donnelly announced on Friday, Taylor Nielsen of Lebanon, Indiana, as his guest to President Trump’s first State of the Union speech, scheduled to take place on Tuesday, January 30. Nielsen is a member of the Lebanon Police Department. In 2016, Nielsen arrived at a horrifying crime scene, where a young mother and her four-year old son had been murdered. The experience left Nielsen struggling with mental health challenges. Nielsen’s openness about mental health challenges as a police officer helped advance Donnelly’s Law Enforcement Mental Health and Wellness Act, which was signed into law earlier this month. Nielsen joined Donnelly and Senator Todd Young in April 2017 to advocate for the bill.