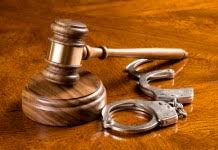 Jason Anderson, 39, of Michigan City, Indiana was sentenced before South Bend District Court Senior Judge Robert L. Miller, Jr. for being a felon in possession of a firearm, announced Thomas L. Kirsch II.
Anderson was sentenced to 180 months imprisonment and 2 years supervised release.
According to documents in this case, in or around March of 2017, Anderson possessed one or more firearms after having been convicted of serious drug offenses in both Indiana and Illinois. The court sentenced Anderson under the Armed Career Criminal Act due to his prior convictions.
This case was investigated by the Bureau of Alcohol, Tobacco, Firearms and Explosives with assistance from the LaPorte County Drug Task Force and the Michigan City Police Department. The case is being handled by Assistant United States Attorney Molly E. Donnelly.
This case was brought as part of Project Safe Neighborhoods. Project Safe Neighborhoods is a nationwide commitment to reduce gun crime in the United States by networking with existing local programs targeting gun crime.