Indiana State Police Trooper Captures one of the U.S. Marshals Most Wanted 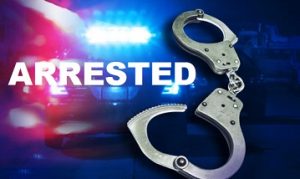 One of the U.S. Marshals’ most wanted who they considered armed, reckless, and dangerous was captured by an Indiana State Police trooper. Thursday evening., Trooper Alyssa Partyka was working when she saw a Buick Century going south on Broadway in Gary without a license plate. The Buick turned east onto East 20th Place when she made a traffic stop on it.
The driver verbally identified himself but fumbled with providing his date of birth and didn’t know his social security number. The driver stated his license was out of Georgia and provided the title to the car and said he bought it recently. There was also a female and infant in the car who later stated she had only met the driver a few weeks ago and he was just giving her a ride. Partyka after receiving the Bureau of Motor Vehicle return from Georgia noticed that the photo resembled the driver but he didn’t have the same facial tattoos. The driver was given multiple opportunities to provide his correct information but continued to give the same information he originally gave. He continued with this even when he was placed in handcuffs and told he was arrested for identity deception and that he would be fingerprinted at the jail to get his true identity. On the way to the Lake County Jail the driver told Partyka he was nationally wanted and gave her his true identity as 43 year old Andre R. Brunt, and was wanted in Wisconsin. He also stated the U.S. Marshal’s have been looking for him and that he had been on the run since 1996. It was later confirmed that Brunt was wanted on multiple outstanding warrants from multiple agencies; which included armed robbery, felon in possession of a firearm, dangerous drugs, sexual assault and forgery. He was incarcerated at the Lake County Jail in Crown Point.