Posted on: September 4th, 2018 by [email protected] No Comments 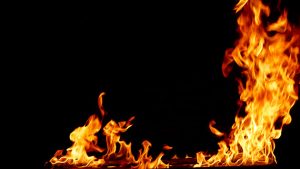 On Sunday morning, The Michigan City Fire Department was dispatched to the 400 Block of Pleasant Avenue for a residence on fire from a possible explosion. Engine 2 located along Hwy 12 was first on scene and confirmed that the residence at 436 was on fire along with the home next door at 426 Pleasant. Engine 1 located at 10th & Ohio arrived soon after along with Engine 4 and Tower 1(Cleveland Ave). Engine 2 confirmed during their size up of the incident upon arrival that the residence at 436 was collapsed and the roof of the house was laying on the ground along and debris from the explosion were scattered throughout the neighborhood. The residence at 426 Pleasant was on fire on the north side of the house adjacent to 436 Pleasant. Engine 3 Hwy 212 was also dispatched to report to the scene. The fires were quickly put out and under control within minutes of arrival. No injuries were reported during the incident and the residence at 436 Pleasant where the explosion occurred was vacant. Fire Chief Randy Novak was on scene moments after the initial call came in. Chief Novak commented that “We are very lucky that this incident happened early Sunday morning as no one was out and about in the neighborhood. The area is a heavy populated residential area with children and many residents typically outside”. Homes adjacent to the property received some structural damage along many car windows and several windows from residences up to a block away were blown out. Assisting the Michigan City Fire Department at the scene was the Michigan City Police Department, American Red Cross, Emergency Management Agency, Michigan City Refuse and Street Department and Michigan City Inspection Department Officer Sue Downs. Also on scene was NIPSCO and a Fire Investigator from NIPSCO, ATF and an investigator from the State Fire Marshalls office. The cause of the explosion is still under investigation and being conducted by the Michigan City Fire Department, ATF, State Fire Marshall’s office, NIPSCO Fire Investigator and the Michigan City Police Department.