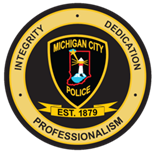 Chief Mark Swistek and The Michigan City Police Commission, made up of President Michael Palmer, Vice-President Michael Buda and Secretary John Pliske, are proud to announce the hiring of two new officers. Sworn in by City Clerk Gale Neulieb, and Chief Mark Swistek during a ceremony in the Community Room were Officers Isaac Murray and Mark Galetti.
Officer Isaac Murray age 22, is the son of Timothy and Cynthia Murray, and is from Wadsworth, Illinois. Officer Murray is currently serving as a Reservist in the United States Air Force as a Senior Airman with two deployments to Turkey. Isaac was previous employed for the last four years, with the Winthrop Harbor Police Department as a Community Service Officer. Officer Mark Galetti is 28 years old and the youngest of five children of Joseph and Cheryl Galetti. Upon completing high school, he enlisted in the United States Navy serving from 2008 to 2012, where he was deployed twice to the Middle East and Europe. Upon returning from the military, he obtained a bachelor’s degree in International Relations from Valparaiso University. They begin their training on October 16th, where they will receive intensive training in various areas including firearms, defensive tactics, emergency vehicle operation, and criminal law. Prior to beginning the Indiana Law Enforcement Academy, they will complete a 2-month field-training program. With the hiring of these two officers it brings the current staff to 83 sworn officers.