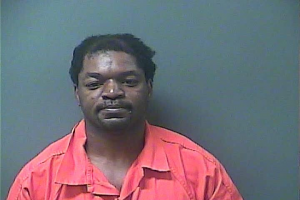 At approx. 11:30 am Friday morning, Courthouse security Deputies Jon Keene and Aaron King were physically attacked by in individual who was later identified as 37 year old Joshua Duncan, from Michigan City. At approx. 11:30 am, Joshua Duncan walked into the courthouse and as he entered the security checkpoint, he without provocation or warning “sucker” punched Deputy Keene in the nose. He then turned toward Deputy King and began physically assaulting Deputy King. Deputy Keene drew his issued taser, deploying it on Mr. Duncan. as the fight continued, both deputies were eventually able to gain control of and handcuff Mr. Duncan. With the assistance of the Michigan City Police Department, Mr. Duncan was transported to the LaPorte County Jail, where he is being held on two preliminary counts of felony battery of a law enforcement officer. Deputies Keene and King were transported to Franciscan Hospital Michigan City for their injuries. Deputy Keene suffered a severe nose injury and Deputy King suffered minor scratches to his arms. Sheriff John T. Boyd wishes to commend both deputies for their quick action and resolve, to take Duncan into custody even though they were injured, thus preventing any harm to the other county employees or citizens that were in the courthouse at the time of this incident.