Posted on: December 5th, 2018 by [email protected] No Comments 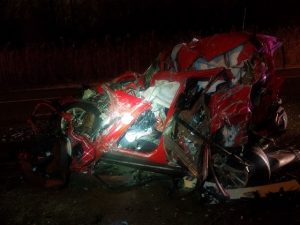 Preliminary investigation by Trooper Connor Davidson revealed that shortly after midnight on December 5, 2018 a 2005 Ford F150, being driven by Merrillville resident 39 year old Milton Harvey struck a red Ford Focus, being driven by Winamac resident, 22 year old Wyatt Spence. The impact from the crash pushed the Ford Focus into the back of a tractor trailer that was stopped in traffic. The tractor trailer was driven by 41 year old Scott Glassey of Reinholds, Pennslyvania. He was uninjured in the crash. The crash occurred at the 9.2 mile marker of Interstate 80 (Just east of Grant Street exit) on the westbound side. As a result of the crash, all westbound lanes had to be closed. The driver of the Ford Focus was trapped inside of his vehicle and had to be extricated by Gary Fire Department. He was transported to Northlake Methodist Hospital in Gary, Indiana with serious injuries. The driver of the Ford F150, Milton Harvey, was also transported to North Lake Methodist Hospital with non-life threatening injuries. Alcohol may have been a factor in this crash, toxicology is pending.