Posted on: December 9th, 2018 by [email protected] No Comments 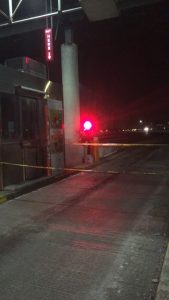 On Saturday, an Oswego, Michigan woman was brought back to life after she got herself pinned between her vehicle and a toll booth.

Preliminary investigation revealed at approximately 9:19 p.m., Trooper Ala’a Hamed responded to a personal injury crash that occurred on the Indiana Toll Road west bound at the 1 mile marker (this is the West Point Toll Plaza-one mile east of the Illinois/Indiana border).  Upon arriving he saw that a silver Buick SUV was against the toll booth with a female entrapped between the driver’s side and the booth.

The female was unconscious and unresponsive with no pulse at this time.  Hamed had a bystander and a toll attendant hold on to the female as he attempted to move the car.  As he slowly moved the Buick the female was freed.  After laying her on her back, Hamed reassessed her vitals and again found she had no pulse.  After retrieving his department AED (Automated External Defibrillator) from his police car he applied the AED pads to her body. The AED advised after being activated it could not locate a pulse and to begin CPR (cardiopulmonary resuscitation).  Hamed began CPR and during this time Hammond EMS arrived on scene.  While still hooked up to the AED and on the EMS stretcher the AED activated twice resuscitating her.

She was taken to Franciscan Health Hospital in Hammond and later airlifted to Christ Advocate Medical Center in Illinois with serious injuries.  She was later identified as a 40 year female from Oswego, Michigan.

Witness stated that the female had taken a long time to pay her toll (this area is an electronic toll where you can swipe a debit/credit card or pay cash).  They saw her open her door to retrieve something that had fallen to the ground (later found to be the woman’s debit card).  The woman put her leg out between her car (Buick) and the toll booth and continued looking at the ground.  The Buick lurched forward and the woman became wedged between the open car door and the yellow waist high toll box that the toll gate is mounted to.  A witness pushed the help button at the toll gate and tried to open the passenger door but it was locked.  The woman at this time was awake and speaking but the car moved forward two more times each time wedging her further into the box.

The witness and another male were able to get the passenger window down and place the Buick in park, when shortly thereafter Hamed and a toll attendant arrived.